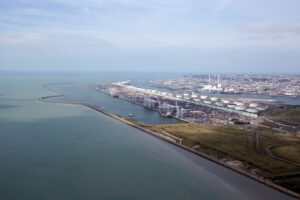 After four decades during which it has been represented by CLB Liner (NAXCO group), the Taiwanese shipping line and the French group NAXCO have now formed a joint venture, YANG MING (France) SAS.

This is a major step forward for the ninth largest global shipping line, which has chosen Le Havre to expand its investment in the French market.

Founded in 1972 and based in Chilung (Taiwan), YANG MING MARINE TRANSPORT CORP. (YANG MING) is continuing its efforts to enhance its competitiveness. As a member of the maritime consortium THE Alliance, YANG MING offers a number of weekly services calling at Le Havre and Fos-sur-Mer with destinations in Asia and North America. Thanks to its regional transhipment hubs, YANG MING is able to offer its French customers an extensive network of specific services to a wide range of destinations around the world. The birth of YANG MING (France) on 1 January 2021 is a strong signal of the determination of the world’s ninth largest container shipping line to develop in the French market.

“The creation of a French subsidiary strengthens our global integrated office network”, explains Steven Ka, formerly YANG MING CEO in Australia and now in charge of the new entity. He adds: “Based in Le Havre, France’s leading port for external trade, YANG MING (France) SAS will consolidate its trading capacity and enable greater operational efficiency to be achieved in the French market.”

Laurent Foloppe, HAROPA’s Sales & Marketing Director points out: “Basing the new French subsidiary of the YANG MING shipping line in Le Havre with an integrated office under the group label will consolidate the attractiveness and competitiveness of our port complex. It is also an important sign of the confidence felt in the development of our connections to the world’s major ports, including the major hubs in Asia. With this new YANG MING France entity in Le Havre, no less than six shipping lines have now chosen our Ocean City as the location for their main office, not forgetting all the French operational bases maintained here by the majority of shipping lines.”