Trade Wars: The Pain and the Gain 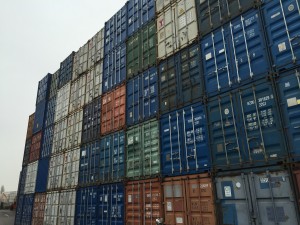 But who’s feeling the pain and gain amid the protracted tensions? And what does the ongoing wrangling mean for developing countries? A new study by UNCTAD looks at the repercussions of existing tariff hikes by the United States and China, and the effects of the increase scheduled for 1 March.

“Because of the size of their economies, the tariffs imposed by Unites States and China will inevitably have significant repercussions on international trade,” said Pamela Coke-Hamilton, who heads UNCTAD’s international trade division, as she launched the Key Statistics and Trends in Trade Policy 2018.

The study underlines that bilateral tariffs would do little to help protect domestic firms in their respective markets.

The study estimates that of the $250 billion in Chinese exports subject to US tariffs, about 82% will be captured by firms in other countries, about 12% will be retained by Chinese firms, and only about 6% captured by US firms.

Similarly, of the approximately $110 billion in US exports subject to China’s tariffs, about 85% will be captured by firms in other countries, US firms will retain less than 10%, while Chinese firms will capture only about 5%. The results are consistent across different sectors, from machinery to wood products, and furniture, communication equipment, chemicals to precision instruments.

The reason is simple: bilateral tariffs alter global competitiveness to the advantage of firms operating in countries not directly affected by them. This will be reflected in import and export patterns around the globe.

Countries that are expected to benefit the most from US-China tensions are those which are more competitive and have the economic capacity to replace US and Chinese firms. The study indicates that European Union exports are those likely to increase the most, capturing about $70 billion of US-China bilateral trade ($50 billion of Chinese exports to the US, and $20 billion of US exports to China). Japan, Mexico and Canada will each capture more than $20 billion.

Although these figures do not represent a large slice of global trade – which was worth about $17 trillion in 2017 – for many countries they make up a substantial share of exports. For example, the approximately $27 billion of US-China trade that would be captured by Mexico represents a non-negligible share of Mexico’s total exports (about 6%).

Substantial effects relative to the size of their exports are also expected for Australia, Brazil, India, Philippines, Pakistan and Viet Nam, as shown below:

However, the study also underscores that even for countries whose exports are set to increase because of the trade sparring, not all the results will be positive.

The soybean market is a case in point. Chinese tariffs on US soybeans have resulted in trade distortionary effects to the advantage of several exporting countries, in particular Brazil, which suddenly became the main supplier of soybeans to China. But because the magnitude and duration of tariffs is unclear, Brazilian producers have been reluctant to make investment decisions that may turn out to be unprofitable if the tariffs are revoked. Moreover, Brazilian firms operating in sectors using soybeans as inputs – such as livestock feed — are bound to lose competitiveness because of price rises stoked by Chinese demand for Brazilian soybeans.

The study also underlines that while some countries will see a surge in their exports, negative global effects are likely to dominate. A common concern is the unavoidable impact that trade disputes will have on the still fragile global economy. An economic downturn often accompanies disturbances in commodity prices, financial markets and currencies, all which will have important repercussions for developing countries. One major concern is the risk that trade tensions could spiral into currency wars, making dollar-denominated debt more difficult to service.

Finally, in an interconnected global economy, the tit for tat moves of the trade giants are likely to have a domino effect beyond the countries and sectors targeted. Tariff increases penalize not only the assembler of a product, but also suppliers along the chain. For example, the high volume of Chinese exports affected by US tariffs is likely to hit East Asian value chains the hardest, with UNCTAD estimating that they could contract by about $160 billion.

The ongoing trade tensions initially came to a head in early 2018 when China and the US imposed tariffs on about $50 billion of each other’s goods. The confrontation quickly escalated, and in September 2018 the US imposed 10% tariffs covering about $200 billion of Chinese imports, to which China retaliated by imposing tariffs on imports from the US worth an additional $60 billion. The 10% tariffs were initially due to rise to 25% in January 2019. However, in early December 2018 the parties agreed to freeze the tariff increase until 1 March 2019.