Fuel consumption is a burning issue in the race for ship emissions compliance, says study 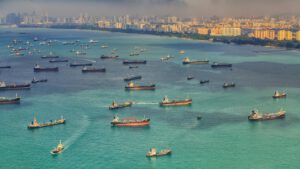 Operational and technical measures are the most viable route to emissions abatement and compliance for the existing fleet of tankers, bulkers and containerships as many of these are unsuitable for low-carbon fuel conversions that can also pose commercial and other risks, according to a study.

The fresh in-depth analysis, entitled Energy Transition in Shipping – Facts and Timeline, has assessed the commercial and technical viability of measures to cut emissions in the three ship sectors over the next three to five years.

It has been carried out by the Maritime Oslofjord Alliance and funded by Oslo Maritime Foundation and Oslo Shipowners’ Association, in association with report author and editor Svein Helge Guldteig of Ocean Consulting AS.
According to the study, the three segments of vessels above 5000 tonnes deadweight account for about 80% of the greenhouse gas emissions (GHG) from the world fleet of around 94,000 vessels. Some 19,000 vessels of more than 25,000 gross registered tons, or 21% of the global fleet, consume 65% of all fuel used in shipping.

Resolving GHG emissions in the larger container, bulker and tanker segments will have an immediate and larger impact on the total emissions than any other shipping segment as they have the ships that consume the most fuel.
The study also states that only around 15%, ie. 2700 tankers, bulkers and containerships, are outfitted with electronically controlled main engines that make them viable for conversion to alternative fuels, which could cut emissions by 100 million tonnes annually.

Therefore, “most existing ships will have to find other applicable ways and means to reduce emissions based on tangible technical and operational measures”, states the report.

Pressure is mounting on shipowners to take action to ensure compliance for their existing fleets with EEXI and CII requirements, effective on 1 January 2023, that are intended to meet the IMO´s initial goal to cut the carbon intensity of shipping by 40% within 2030 and halve emissions by 2050.

These rules are set to become progressively tighter over time, with the IMO strategy due for revision next year, and are set to affect the commercial value of existing tonnage if not complied with.

Furthermore, the industry faces the prospect of punitive carbon pricing for pollutive ships with the prospective inclusion of shipping in the EU´s Emissions Trading System next year under the so-called Fit for 55 package of measures aimed at cutting maritime emissions by 90% within 2050.

However, meaningful cuts in emissions can be achieved in the near term by implementing relatively low-cost measures focused on reducing energy and fuel consumption, according to the report.

It highlights slowing ship speed as “the most powerful way to cut emissions”, citing an estimated reduction of 50% in fuel consumption and emissions by reducing speed from 15 to 12 knots. A 10% reduction in speed for a typical merchant ship is estimated to cut emissions by 27%. Another operational measure to reduce emissions is using drop-in biofuels or e-fuels into the existing fuel.

There are also technical steps that can deliver significant fuel efficiency gains including modification and optimisation of hull and propulsion equipment, as well as retuning the engine for lower loads at reduced speed.
Report author Svein Helge Guldteig says “slow steaming has formerly been used sporadically over the past five decades to save fuel costs in periods with high fuel prices and adverse market conditions”.

“In recent years slow steaming has been applied in many shipping segments, and reduction of emissions of existing ships beyond the current level will require even lower speed and/or other technical and operational measures applied in the future,” Guldteig explains.

And he adds: “Digitalisation can now play an important role in supporting operational measures and realising potential savings from fuel optimisation that were not possible only a few years back.”

Aside from a limited scope for retrofits, the report highlights drawbacks with fuel conversions related to cost, regulatory compliance, energy density and fuel tank space requirement that can negatively affect commercial operations.

“Many existing ships will face technical and economical hurdles in the process of being converted to use alternative low or zero-carbon fuels – such as LNG and methanol – with a flashpoint below 60 degrees Celsius for which strict IGF* regulations will apply,” Guldteig says. (* International Code of Safety for Ships Using Gases or Other Low-flashpoint Fuels).

The report further states that “scarce availability of alternative fuels and most likely limited shipyard capacity will limit the readiness to adapt quickly for the large vessel shipping segment”, while there is also a lack of global shipyard capacity for the volume of conversions required in a 3-to-5-year perspective.

Another long-term dilemma is whether there is worldwide shipbuilding capacity available to renew the entire shipping fleet within the time limit set by regulators for the global fleet emissions.

Heavy investments will be needed to scale up global supply infrastructure for green and blue fuels, which is not expected to be in place until 2035-40 at the earliest, also challenged by the fact that existing LNG bunkering vessels sufficiently can supply only around 5% of the world fleet.

This points to the quandary that the existing fleet using conventional fuel will still have to contribute significantly to reducing GHG emissions in the short and long term.

A complete conversion on an existing vessel to alternative fuels, on the other hand, is in the range of $18–20m, and such an outlay has to be shared across the shipping value chain to compensate owners for front-loaded costs to incentivise investment in retrofits, according to the report. The relatively high cost of alternative fuels would also necessitate a carbon tax level of 200% to make such a fuel installation economically viable.

However, a carbon tax would be an incentive to reduce the overall fuel consumption and thereby also the emissions.

Guldteig states that “investing in newbuilds with technology based on scarce alternative fuels carries a huge commercial and technological risk, even with multi-fuel engines now becoming available, and there should be an increased focus on building new ships designed for lower fuel consumption in line with CII (Carbon Intensity Indicator) demands”.

The report also stresses an overlooked item related to securing competent human resources and crew to operate vessels with more advanced control systems and procedures to maintain safe operation and handling of new onboard technology and bunkering systems. Such skillsets will be in demand and will take time to develop. The industry will need to collaborate to enable safe operation of vessels operating with net-zero emission technology, it states.
There is no complete and final technology and infrastructure available to deliver on the industry’s mission to reduce GHG emissions within the timeline envisaged by regulators. While the industry waits for future solutions, optionality on types of fuel, design and infrastructure in the investment decisions by owners and operators are vital to minimize risk, according to the study.

“There is no silver bullet that can solve the decarbonisation issue in shipping – neither for new nor existing ships,” Guldteig says, adding that development of green corridors will be a first important step towards decarbonisation of shipping in the future.

SOME FACTS
• For existing ships there are limitations as to what can be done to reduce emissions in the short and medium-term perspective (3-5 years).
• Some 2,700 ships can be retrofitted to reduce emissions by 100m tonnes annually.
• There is only a limited amount of net-zero carbon emission available, and the technology, distribution and logistics for alternative fuels are scarce. The maturity of technology is in its early or infant stage.
• Reducing energy consumption by operational and technical measures is the most promising route to follow overall.